As Anzac Day approaches we would like to shed some light on Dentistry in war times.

Pull the Other One! – Dentistry in the 1st AIF 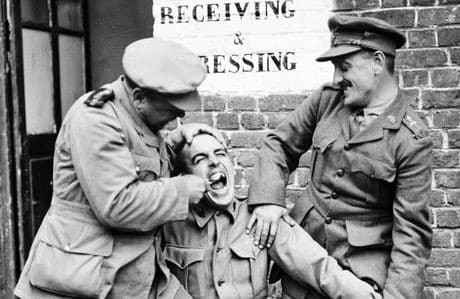 Dental health was an important aspect of physical wellbeing during WW1. When neglected, it had a serious impact on the manpower of the army.

Many will remember the scene in the 1981 Peter Weir film Gallipoli, where the character Snowy is trying to enlist in the 1st Australian Imperial Force (AIF). The Army Doctor says to him: “[Your] teeth aren’t all that good”, to which Snowy replies, “Suppose to shoot the enemy mate, not bite them”.

While Snowy may have been correct, dental health was an important aspect of physical wellbeing during WW1. When neglected, it had a serious impact on the manpower of the army as it caused fighting men to be withdrawn from the frontlines.

At the beginning of the WW1, the Australian Army had no specialist dental services and, in all probability, Snowy would not have been enlisted. In part, this was because the organisation of the AIF was based on the British Army, where dental services were provided by the Regimental Medical Officer (RMO). This was very much a secondary task for the RMO, since dental disease was seen to be outside of the interest of orthodox medicine. When war broke out in 1914 many dental practitioners volunteered for service in the AIF but, since there were no dental units, they were not enlisted as specialist. Some went to medical positions in the field ambulance and, using regimental funds, purchased the necessary dental tools or were supplied with these tools through the Australian Red Cross.

Because the original enlistments in the AIF were extremely selective, the dental fitness of the first troops sent overseas was generally good. However, the need for reinforcements meant the recruitment of those with a lower degree of dental fitness. On 6 January 1915, approval was given for the establishment of an Australian Army Medical Corps Reserve (Dental). This provided dentists for the increasing number of recruits who required dental work to make them medically fit for service overseas.

The Army’s ad hoc approach to dental health had consequences at Gallipoli where the condition of ulcerative gingivitis (or trench mouth) became prevalent. Not only did this disease lead to pain and discomfort, but those who suffered from it were often unable to eat their ration of hard army biscuits. With no proposer facilities to treat this disease, those soldiers who were qualified dentists in civilian life began to treat their fellow soldiers on a part-time basis, usually when they were off duty or not on fatigue parties. Facilities were extremely rudimentary, the typical ‘dental surgery’ being a space in the side of a dugout often a few yards from the Turkish lines. If the patient was lucky, the ‘surgery’ would have with a homemade dentist chair built by the unit carpenter. Owing to the lack of dental supplies and equipment, often the only treatment that could be applied to an offending tooth was the extraction.

By the end of June 1915, the demand for dental services in Egypt and Gallipoli had become so urgent that the need could no longer be ignored. 14 dental officers, 12 dental mechanics and 13 privates were authorised for overseas service, with half of these officers coming from those qualified dentists already in Egypt but employed in other duties. There were significant shortages of dental equipment with the supply of Plaster of Paris, used for making dental moulds, being particularly critical. Unable to source Plaster of Paris from the United Kingdom the Australian dentists decided to make their own. A gypsum deposit was located in the desert, some 128 kilometres from Cairo. Avoiding marauding desert tribesmen, the dental staff sourced the mineral, burnt and ground it in a brickyard kiln, packed the residue into disused petrol tins and brought it back down the Nile to Cairo. It was then used it as a passable Plaster of Paris substitute.

Following the Gallipoli campaign and the early Sinai battles, the experience of having to evacuate soldiers from the front line due to dental disease meant that AIF commanders now recognised the advantages of good dental health. By April 1916 the Army had 36 fully equipped dental units, with three dental sections attached to each division and one to each field ambulance. Equally important was the development of Army dental policy, although this lagged behind the establishment of units. Australian reinforcement depots in the United Kingdom, pressured to make up for the casualties suffered in the battles of 1916, often sent troops to the Western Front without any dental checks. Dental officers were powerless to prevent this since, under military law, only the unit RMO had the power to declare a soldier as unfit for frontline duty.  It was not until February 1917 that a General Routine Order was issued giving dental officers the power to parade men for compulsory dental inspection and treatment. This Routine Order, combined with the definition of dental fitness (a mouth free from dental disease and enough teeth to eat with), provided the necessary authority for effective dental treatment.

The dental history of the AIF between the years 1916-1918 is one of improving capacity and technique. In 1916-17 there was one dental officer per 7,500 men and by 1918-19 this had increased to one dental officer every 4,250 men. It is no coincidence that by 1918 the increase in dental health amongst the AIF was noticeable. Extraction ceased to be the only option for dental treatment, with policy guidelines requiring that ‘no teeth should be extracted which can be saved’. A 45 per cent decline in extractions was complemented by a 65 per cent increase in the number of fillings. Crowns, dentures, bridge work and root canal treatment numbers increased. Where soldiers had insufficient teeth to grip the mouth piece of a gas mask, dentures were usually provided, with the soldiers typically wearing the upper dentures while carrying the lower set in their pocket. The magnitude of the pioneering work done by the AIF Army dental units is illustrated by the following statistics for dental work completed between August 1915 and June 1919:

By the close of WW1, a small cadre of dental officers carried out exercises to capture the lesson of the AIF and refine the tools and doctrine for practice of dentistry in the field. This experience provided the core capability for Army dental services in the Second World War, with recognition of the importance of dental services leading to the creation of a separate Australian Army Dental Corps in 1943. It became the Royal Australian Army Dental Corps in 1948.

For those with a further interest in Army Dentistry should seek the book: Fang Farriers, Australian army dentistry in war and peace: a history of the Royal Australian Army Dental Corps by Sven Kuusk. This book was supported by an Army History Research Grant.